Flying into an Agile transition

So just what does a transition to Agile look like? I have recently read a a number of academic papers, journals and books on this subject (consequent to an ongoing PhD). As a result, I have learned a lot about the underlying theories and philosophies of Agile software development (including numerous accounts of Agile transitions); many of which have been the subject of rigorous empirical research. I have also learned, that there are any number of freely available lists, taxonomies and frameworks; many composed by well known authors, thought leaders and industry experts.

However, I have not yet come across one which describes anything quite like the day to day experience I have been living for the last 6 months: co-leading a team of IT professionals from working in a world which was definitely not Agile to somewhere that is now describable as Agile.
Most of the empirical research I have read has been of great value; I believe that bringing an understanding of theory to your practice is vital: it helps you to become a better practitioner. But none of the beautifully written theories or frameworks describe the world that I live in right now. Practical advice for day to day survival in an imperfect world seems thin on the ground.

The thing that has helped me survive (so far) the feeling of imminent drowning in items to address, has been what I learned from a website all about housework. The rest of this post is a light-hearted attempt to draw a comparison between transitioning to Agile, and the process of getting your house in order as described on www.Flylady.net.

I found Flylady a while ago; I was engaged in a domestic engineering project involving two babies and a part time undergraduate degree. I stumbled across the website and saw myself described on the homepage. I was suffering from C.H.A.O.S (can't have anyone over syndrome). If anyone ever did want to come over and visit, I would do just about anything to avoid it; I did not want anyone to see the unmade beds, scattered toys, fingerprints and laundry (Mt Washmore rivaling Mt Rushmore) to be done. 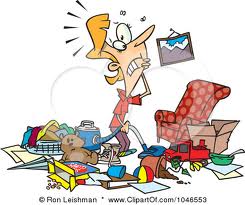 The house was a total mess most of the time, I was disorganised, often late and felt totally overloaded. I could not get past the idea that if I could just get it all tidied up at once, and in a finished (done) state everything would be better, but the whole thing was too overwhelming to even start.

The Flylady website was offering a cure for free, so I accepted. I found lots of useful materials on the site, especially for those who really do want to become a domestic god(dess). Generally the website message is light and positive. Some folks might consider it all a bit cheesy; Flylady stands for "Finally Loving Yourself" however, if you can work through, or skim over this, it delivers some key messages and ideas which could apply to any complex endeavour. I'd like to reference some of this material and the way that I have found it useful in my current context.

1. Don't try to catch up, jump in right where you are

It would be nice to have things all planned out, it would also be nice to have the time and resources to implement a textbook Agile transition, with an appropriate project, training, management support and enthusiasm all in place first. Does this ever happen?

If there isn't the will, the time or the resources, you just have to start somewhere. You can't drive yourself crazy trying to convert all the use case documents to user stories before you begin. It's ok to just start from the next sprint, it's also ok to try a process or approach, learn from it and change it. We started with stand ups and began to grow into our transition from there.

Flylady starts with asking you to add one simple practice to your life each week. The first idea is that you shine your kitchen sink every night (this implies doing the dishes), so that when you wake up in the morning, it looks good and makes you smile (this one works!). Also, the contention is offered, that if the kitchen in a house looks tidy the rest of it also looks better.
Practices are added each week throughout the year and if you follow all the advice on the habit list I'm quite sure that you would end up a domestic paragon. I never managed this, but mostly still adhere to shining my sink, getting dressed to shoes and prepping my clothes for tomorrow every day. Having one day a week for school and family paperwork, and planning the menus for the week are also valuable Flylady habits. I have not achieved a self organising team to do the cooking though.

We have added one new scrum practice every week or so, we refine them as we use them. Most recently we started to really emphasise the importance of each team member understanding wider priorities and selecting work based on these. We are making good use of our retrospectives to prioritise practices to review, but it still tends to be on a firefighting basis.

Divide your home, or your endeavour into zones, my house has rooms, my project has areas, such as requirements, development, QA, Dev-ops and process improvement. Focus on each of these in a rotating cycle, and "De-clutter" (clean up) in the current zone for 15 minutes a day. The kicker that goes with this advice, is that "you can do anything for 15 minutes" (set a timer).
You can get through quite a few of those old use cases in 15 minutes a day every day.

I could draw many more detailed examples, but I think that's probably quite enough for a blog post. Especially one which includes housework. I will be spending the remainder of this year working on a research project which will try to understand and describe what Agile transitions are really like, I hope to propose some practical solutions for others to use. Consequently, my house is total chaos again. This time, I don't really mind, my babies are now teens and we all love having people over.