Have you got the FEAR? 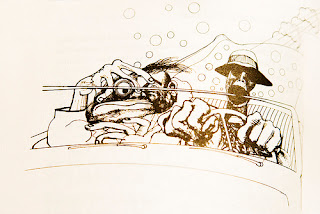 "We were somewhere around Barstow on the edge of the desert when the drugs began to take hold. I remember saying something like "I feel a bit lightheaded; maybe you should drive..." And suddenly there was a terrible roar all around us and the sky was full of what looked like huge bats, all swooping and screeching and diving around the car, which was going about a hundred miles an hour with the top down to Las Vegas. And a voice was screaming: "Holy Jesus! What are those goddamn animals?"

Then it was quiet again. My attorney had taken his shirt off and was pouring beer on his chest, to facilitate the tanning process. "What the hell are you yelling about?" he muttered, staring up at the sun with his eyes closed and covered with wraparound Spanish sunglasses. "Never mind," I said. "It's your turn to drive." I hit the brakes and aimed the Great Red Shark toward the shoulder of the highway. No point mentioning those bats, I thought. The poor bastard will see them soon enough."

The paranoia in this passage comes to me on a regular basis as I talk to corporate workers about the need for change. I feel it. The fear. I can sense the bats swooping, screeching and diving. Whether it's telecoms, education, or finance the bats are swooping.  Soon they will be here.

I don't get scared by this. I get a rush of adrenaline because I know I am going to be fine personally, and I know that there is so - SO - much to do.  And it's exciting.

But most people don't seem to get it.

Incumbent Telcos are dead unless they re-invent themselves today.

Let's take two examples; education and telecommunications.  I work in both these industries today and deal with people.  There is a general sense of wanting to do more, get better at rolling product and delivering positive experiences to customers (alt: students.)

But that sense of wanting to improve comes from a well of general goodwill towards customers (alt: students) and while top of mind doesn't have the blind fear and panic that is more appropriate to the situation.  I work in these industries because I want the people in them to do well, and to have great products and services they can be proud of.

(My contribution is to help people think differently about their circumstances and while I am sure that will always in demand Skynet may have other ideas.)

What is likely to happen in Telecoms?

In Australia a national broadband network is rolling out with the ability for almost anyone to connect from the network to local homes and businesses.  The minor players in the Australian market are likely to be smashed by the larger players who can throw money around and get market share.  The argument the politicians put forward is that this will lower barriers to entry and create new competitors and new jobs.

Lower barriers to entry will mean that businesses like Facebook, Google and Microsoft who all have telecoms platforms can come into the market with relatively liked brands (this is the Telco industry) and  destroy all incumbents.  DESTROY.

Even our major two telcos will shrink to a small share of the market of these three (heaven forbid Apple considering joining in.)  And the tens of thousands of jobs out there will not be replaced by jobs in the new players.  The new guys will do what 20,000 back office and IT workers do with a few dozen to a few hundred.

Unless the major players in Australian Telecommunications do the whole culture shift they are counting down their days.  Within a few years the market erosion will begin and the jobs will begin to be shed.  How soon?  I'd reckon the next round of CEOs are unlikely to collect their exit bonus.

Education is going to shift online faster and more completely than people expect.

Eduction is in the cross-hairs too.  In Victoria education is a major portion of the local economy. What will happen to the many tertiary institutions when learning goes online?

People in the industry say don't worry: "People want the campus experience.  Building networks and relationships is as important, if not more than learning from the curriculum."

People are leaning to grow and nurture online relationships as we speak.  Remember this whole broadband thing is only a few years old.  YouTube is only a month old.  Facebook was born last week.  Twitter popped up an hour ago.

In five or so years people will be used to online communities and investing heavily into them.  They'll also be expecting learning to be delivered online, and with much greater flexibility than what is offered today.

Whole new technology platforms need to be built to replace the tools that service the existing classroom based models.  Organisational structures need to be redesigned to focus on where the growth will be.  Marketing needs to be invested into brand building to push ahead of the pack and to own a niche.

Don't believe me?  Check out Stanford's AI class.  160,000 students within weeks of offering the class?  The economics of online education is totally different to today's.  High end access to the best in class thinkers will become more valuable as demand goes up. At the other end of undergrad style content you'll still have to be awesome and at scale to be a player.

Seen a University IT department recently?  It's generally viewed as a cost centre and a pain to deal with.  Only a few are going to keep up with the change.  Me and my peers are unlikely to be leading the charge (although I'll have a tilt.)

So guess who is going to be there at the mass end?  The start-ups have worked it out.  They have tried several business models in recent years and now they know the pattern that is going to work.  It's now just a matter of time before the feeding frenzy begins.  It would have started already if not for the financial crises of the last few years.

And like the telcos their business models are radically different to the incumbents.  More is done with less.  it's cheaper to scale and a more agile (in the plain English sense) organisation.  People will be replaced by computers and administration becomes automated and decision making and policy is outsourced to consumers.

Yes, time to get a dose of fear and loathing.  Change is coming and it's going to be awesome for consumers, but it is going to disrupt tens of thousands of peoples lives.
Posted by Craig Brown