In 2007 I came across this model by Cameron and Quinn (1) describing aspects to an organisation that shape how you might focus your management style.  The essence of the model is open versus hierarchical control models and an internal versus external focus. Cameron and Quinn's model then gives us four cultural domains to consider; 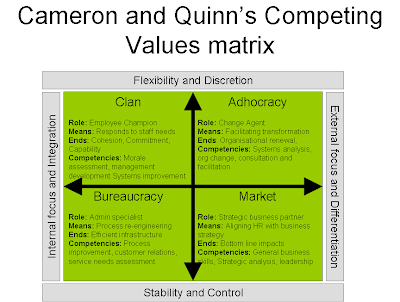 What do these domains mean?

The Clannish organisation, like the local family run restaurant, where people come together more for the social interaction that anything else. The controls are light and open because in this context people are intrinsically motivated to come to work for the reward of social interaction.

It sounds nice until you realise that the team are very much focused on themselves and paying attention to changing market conditions, and even customers isn't really on their radar. Being a staff member is fun, but at the end of the day this business is at risk to competitors and to changing market conditions. This may have been the organisational style of the media industry in decades past, and is still the cultural style at some educational institutions.

Bureaucracy is much maligned, and in the context of this model we can see why; people are not in control of the work they do, and it is internally focused rather than on the market or customers.

Bureaucracy makes sense in some circumstances, and our history shows us where; the people with power have accumulated so much they need someone to guard it.  But the problem that brings is you have to arm the guards and they might want to take over themselves.  The answer is to separate out logistics from the armed forces. Neither can operate without the other, and the structures and command culture reduce the risk of collusion and a power upset.
Where might bureaucracy still remain a viable strategy in our world? Wherever people with power want to stop others from usurping it.

The Market model is where the customers, guided by strict operating protocols dive how we operate. The finance market are an interesting example of this. My most recent encounter was a discussion about internal charging for services.  A system like this helps focus energy on unified goals.

In Cameron and Quinn's thinking this was still also process and hierarchy controlled operating model, but depending on the execution, economic systems like charge-out models can be implementations that might sit on the northern sector of the control-open axis.

This model can be particularly well observed in the open space movement where people come together, try experiments for a few hours or days and then walk away with new value having been created.  The adhocracy is paying attention to the market and has an open culture.  It is the model that we typically aspire to when citing case studies of successful organisations.

In case you are wondering this is the target for people in the lean and agile movement. How can we take our teams on a journey from bureaucracy to adhocracy? What are the way-stations along the way?

There are a number of ideas that come from thinking about this model.

The first I came up with was "What are the environmental models that suit one quadrant over another?"  I could come up with an example for everything, but think I may have been forcing the issue.  It is eminently possible that in a post-industrial economy everyone should be directed to the top right quadrant as soon as possible.

The second question I thought of was when I participate in organisational change, what options and tools do I have, and what techniques can I employ on the journey to adhocracy.  Cameron and Quinn's work gives some insight here, but I'd like to have a more context specific set of examples I can access.

The third question is "To what degree are we aligning (or not aligning) our operating models to our cultural models?

The authors have some of the answers, but we need to explore and discuss these ideas more.  I am keen to hear your thoughts on this. 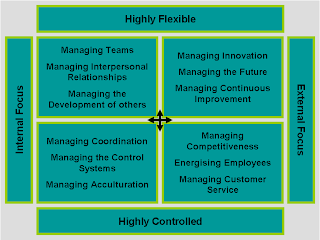