What to do about the resisters to change? 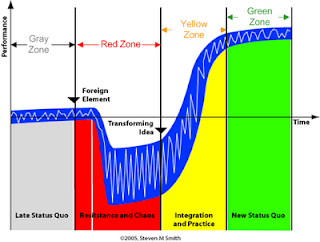 Here's an idea that was suggested to me today; People who resist change will still change.  They just change slower than others.

The idea is that resisters are really trying to hold the status quo.  If your early adopters and the middle packs move on to the new way of thinking and doing business the status quo eventually changes.

After a while your change resisters have adopted the new status quo.

Of course by this time, you are invested into the next (or the subsequent) change initiative.

The picture above respresents this idea and is from an article on feedback loops, which is retelling a story from the 70's.  Check it out.
Posted by Craig Brown