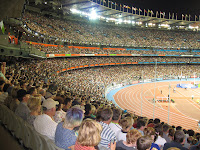 I have skimmed the topic of project success a few times but have never got into the meat of the topic.

Here I am framing some thoughts I have about what constitutes success for project workers like you and me.

I am very interested in comments on this topic so please - have your say.

Project Success
The CHAOS report is quoted often as saying IT projects in particular are unlikely to be satisfactory in the vast majority of cases. Many projects exceed budgets and timeframes and/or fail to deliver on the requirements. Does this mean they have failed?

I have written a series of posts on internal marketing which discusses the importance of marketing to users, stakeholders and the client to help make a project acceptable and indeed perceived as successful. This series mentions a number of success criteria beyon time-cost-quality including user and stakeholder satisfaction.

Product Success
Max Wideman, Project Management guru, has also written an article called Selling into Project Success where he talks about the difference between product success and project success, and how at the end of the day of he product fails, so has the project. As a result of this relationship he suggests you need to factor in the marketing and selling costs of the project.

Project Management Success
Upon further reflection there is the idea that projects can be run without project management. A business can throw people and money at a problem until it is beaten. If a project manager is brought in to the mix the number of people and the amount of money spent will be reduced. That doesn’t mean that the project comes in at the estimated deadline and budget – but it could still be called a success.

So I now have three views of success;

Each of these three aspects will shape what is perceived as true success by the people that count – the ones with the money and more work for you in the future.

Perceived success
And so a fourth view - and a more pragmatic one: My beliefs about success are centred on the client’s satisfaction after the event. Were the clients left happy? Would they hire you again? Will they refer others to you? I think these are the best indicators of success.

What do you think?